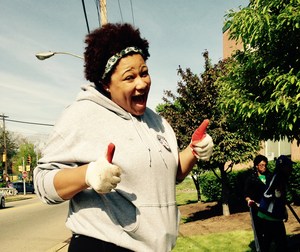 Crossroads is fortunate to fill a new staff position with the bright and familiar face of Val Dillard. Val served Crossroads as a tutor through KEYS AmeriCorps last school year, and she rejoins the team this fall as a full-time counselor...

The magic of each new school year is in the way it brings new faces and opportunities to familiar patterns and ways of life. This year, though, Crossroads is fortunate to fill a new staff position with the bright and familiar face of Val Dillard. Val served Crossroads as a tutor through KEYS AmeriCorps last school year, and she rejoins the team this fall as a full-time counselor.


“The immediate selling point of Crossroads was the plethora of services and programs that are offered to the scholars,” says Val. “[Through KEYS,] I was fortunate to serve at a site that aims to build up the population it serves.”


During the 2015-2016 school year, Val played a direct role in the services and programs she mentions: in addition to her main capacity as a tutor for Crossroads scholars at Seton-La Salle and Central Catholic High Schools, she sat on a college panel at the Senior Retreat, co-planned the illustrious Connecting With Crossroads Week scavenger hunt, served as a peer mentor during St. Vincent Week, and planned a city-wide scholar service project in collaboration with Grow Pittsburgh, Sankofa Garden, and the Homewood-Brushton YWCA.


As a Crossroads Counselor, Val’s role shifts from tutoring to advising, mentoring, and counseling her caseload of 40+ at Oakland Catholic and Central Catholic. She acknowledges the increase in responsibilities, but greets it with humility and enthusiasm: “It certainly has been somewhat of a difficult transition. I have some major shoes to fill,” she says, in a nod to Ms. April Perry, Crossroads’ former Director of Scholar Support Services, “yet I am eager to continue the development of my own personal style and skills to ensure that scholars gain a sense of empowerment.”


A native of Bassett, Va., Val studied psychology and sociology at Radford University, where she graduated with honors in 2015 before moving to Pittsburgh to serve with KEYS AmeriCorps. In addition to her AmeriCorps service term, Val has also worked with Gwen’s Girls and Girls Hope, and volunteered with several other youth-focused agencies supporting the healthy development of Pittsburgh’s young people--experiences she will surely carry into her work here at Crossroads.


Sr. Sandy Kiefer, who supervised Val last school year and oversees Crossroads’ direct-service operations as the Director of Academic Support Services, believes Val will have great impact as a counselor. “She truly embodies the mission and vision of Crossroads,” Sr. Sandy says of Val, “and she gives herself to her students ‘above and beyond the call of duty.’... Her ability to connect with her students is superior.”


That sentiment echoes among staff and scholars alike. Crossroads alumnus Keith Davis, who graduated in May and now attends California University of Pennsylvania, reflects fondly on times when Val worked with him last year. “Val was just great,” he says, “she was helpful and made sure we understood the work we were doing.”

Val says her main goal this year is “to take the time to cater to the individual needs of our scholars. Even if it requires putting in extra time and effort,” she adds, “I aim to see everyone do their absolute best!”