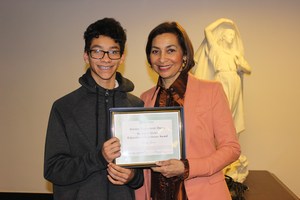 The most wonderful time of year for Crossroads Foundation kicks off with our 2017 Scholar Achievement Awards.

Graduation season is an especially celebratory time at Crossroads Foundation, kicked off annually by our Scholar Achievement Awards.  The 2017 Awards attracted a packed house of scholars, families, staff, board members, and supporters to Synod Hall in Oakland, where our 128 scholars were honored in 15 categories, each representing a key attribute needed for overall high school, college and life success.

An impressive 72% of our scholars were recognized for making the stringent Crossroads Honor Roll, which is determined by calculating an unweighted GPA in core academic courses.  Other key awards recognized excellence in leadership, humanitarianism, resiliency, dedication, attendance, improvement, service, and academics. In addition, as a result of a robust Alumni Relations Program initiated by a two-year grant from the Richard King Mellon Foundation, Crossroads presented its first Distinguished Alumni Award this year as well.

See below for full details on all the awards, and stay tuned for graduation and college transition news on the Class of 2017 coming soon!

Bestowed on students who exhibit an extraordinary commitment to both their responsibilities as high school students and as Crossroads scholars.

Bestowed on scholars who most dramatically improved their GPAs from last year.

Freshman Scholars of the Year

Bestowed on students earning the highest Crossroads GPA in their grade.

Sophomore: TIE between Teya Davis (for the second consecutive year) and Kristina Rajakovich

LEAD stands for Learn, Empower, Advocate, and Discover and is a group of outstanding upperclassmen who applied and were selected to represent their peers as the voice of Crossroads Scholars.

Bestowed on a LEAD member(s) who has gone above and beyond in advancing the group’s mission through scholar leadership, positive role modeling, and effective advocacy.
Junior scholars Sydney Barlow, Katie Knecht, and Angeline Pho of Oakland Catholic

Recognizes a scholar who has overcome significant challenges in the pursuit of their education.

Recognizes a scholar who has made significant contributions to both his/her school and Crossroads Foundation.

Recognizes the scholar(s) who best exemplify all we aim to accomplish through our scholarships.

Sequoia Tate of Oakland Catholic and Antonio Cheatom of Central.

Sequoia Tate has been a LEAD scholar both her junior and senior years and was elected by her peers this year to serve as our first president of the LEAD program.  During her time with Crossroads, she has accompanied staff to many development events, and has also volunteered throughout her school and Crossroads communities.  She takes several AP and advanced courses and is on the Crossroads Gold Honor Roll.  She has been accepted to a number of competitive universities including Howard, Duquesne University and Temple and plans to major in pre-med.

Antonio Cheatom has also been a LEAD scholar since junior year and is a Silver Honor Roll student.   Last summer, he served as a Leader for the annual freshman scavenger hunt through Oakland, and was voted Most Enthusiastic Team Captain. Last summer, Antonio also served as the pilot intern for our new Corporate Sponsorship Program. This school year, Antonio has graciously volunteered his time to help Crossroads in a number of capacities, including as the pilot scholar for a potential promotional video series.  Antonio is headed to Kent State University where he plans to major in accounting.

Bestowed on the parent(s) or guardian(s) who has shown tremendous dedication and commitment to Crossroads.

A Paul G. Benedum, Jr. Foundation Scholar for the 2016-17 school year, Tim has a career interest in bioengineering; is a straight-A student, has taken four Honors courses this year, and holds the second highest Crossroads GPA of 3.88 unweighted in core academic subjects.  In addition, Tim volunteers at his former elementary school, St. John Bosco in Brookline, and is involved in soccer and in several school clubs.

School with the Highest GPA

This award is presented annually to the high school where our scholars have achieved the highest average GPA.  For the second consecutive year, the award goes to our scholars attending Serra Catholic, who have earned a collective average GPA of 3.30. The average unweighted GPA in core subjects for ALL of our scholars this year is an amazing 3.11.

Established this year to recognize a Crossroads alum whose achievements and commitment to “giving back” continue to advance our mission.  The Award and our many new alumni re-engagement initiatives are a direct result of a formative two-year grant from the Richard King Mellon Foundation to establish a robust Alumni Relations Program for our 500+ scholars.

Our inaugural winner is Mr. Ryan McCarthy, class of 1999.

With the help of a Crossroads scholarship, Ryan graduated from Central Catholic and Penn State, and earned his law degree from Georgetown University.  In 2014, he returned to Pittsburgh to join Reed Smith Law Firm as an associate in the Corporate and Securities Group.

Ryan sets an excellent example for all of our current scholars and alumni, and truly embodies the very high standards we have set in establishing the Distinguished Alumni Award.